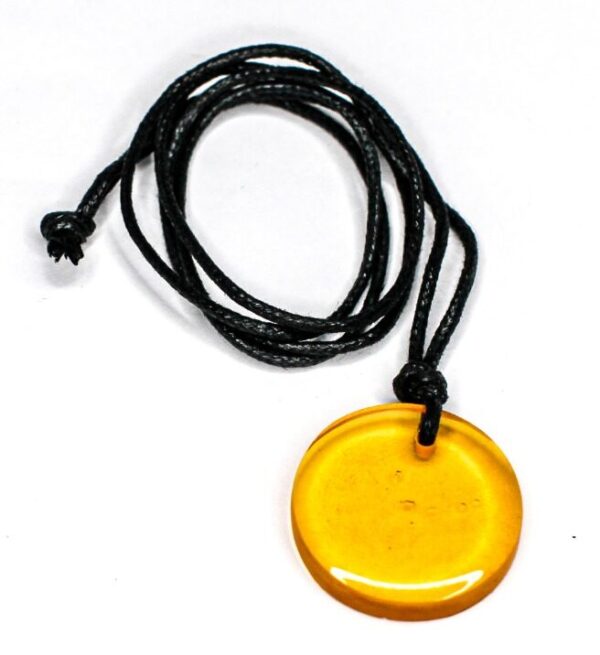 Keep yourself protected from EMR when you’re out and about.
The Orgone Ionic Personal Protection Pendant creates a harmonizing field of negative charge around your body that may support and balance the human energy fields and meridians, neutralizing the depleting positive charge energy influences from all sources of Electromagnetic Radiation.

The Orgone Ionic Personal Pendant was created for continued EMF protection while you’re out and about and away from the protection of the Geoclense™ at home.

By wearing the Orgone Ionic Personal Pendant, your energy levels may be increased due to the supportive and strengthening effect the pendant has on our energy bodies, meridian system and vital organs, which are weakened by the various noxious EMR fields.

Those people who are very sensitive to EMF and suffer from Electro-hypersensitivity and Chemical Sensitivity may find the Personal Protection Pendant particularly helpful.

The Orgone Ionic Personal Protection Pendant may be beneficial for neutralizing the effects of the following harmful, noxious energies: –

“I just wanted to tell you about our awful day visiting Melbourne last week!  Without my pendant! Having become reliant on your pendant!  I’ve been feeling so centered and well wearing the pendant, so my day was completely unexpected.  We arrived from Euroa at Southern Cross Station right on lunch time and then walked to the corner of Queen Street and Collins Street, amidst all the lunchtime people rushing past us in every direction.  On arriving there I became absolutely shattered, had to sit down, and then had to take the tram back to the station.

It wasn’t until later that night that I realized this was how I used to feel before the days of having your Geoclense and pendant!  So, I’m so very grateful for your work!  I’m never going to be without wearing my pendant again, to ensure that I’ll never have another experience like this happen to me!  I’ve just now ordered on your website a pendant for my very sensitive grandson who is coming to visit us from New Zealand on Saturday.  I just thought you might be interested in this!  Thanks again, for everything.”
A. Cotton-Stapleton, Euroa, Victoria

Because of our ongoing research, we have discovered that the new yellow Stellar Pendant™ surpassed all expectations of an EMF harmonizing pendant, delivering a much more powerful pendant for personal protection.

Yellow has the strongest negative charge frequency on the color spectrum than any other color.  The nuclear industry discovered a long time ago that wearing yellow overalls provided passive radiation protection for their workers.  However, wearing yellow garments isn’t going to protect you from 5G and other types of harmful radiation.  When we combine yellow with our unique Orgonium® frequencies, then something special happens.

Our testing showed that the Stellar Pendant™ offered protection for up to 8 meters around the wearer!  No longer is there any need for a pendant to be color-matched to the person like our previous range of colored Ionic Personal Protection Pendants.  The yellow Stellar Pendant™ is suitable for everyone. 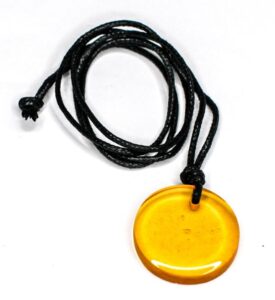 The method of testing we used for the Stellar Pendant™ was on a real person standing under an electrical transformer being subjected to 100 milligauss +, and during a Geomagnetic solar event which was causing a Geoelectric field up to 6 meters above the ground; a situation three times worse than a 5G street light EMF environment and possibly the worst-case scenario as far as radiation exposure goes!  We also tested the person’s normal orange pendant which did provide full meridian protection, however, the Stellar Pendant™ not only provided full meridian protection, it also extended a clear EMF space around the wearer of up to 6-8 meters!

The Stellar Pendant™ is a stellar example of the Art of Harmonizing EMF fields.