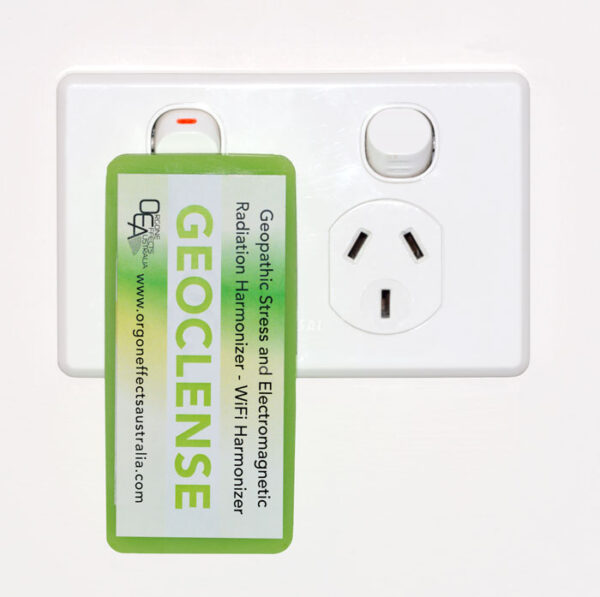 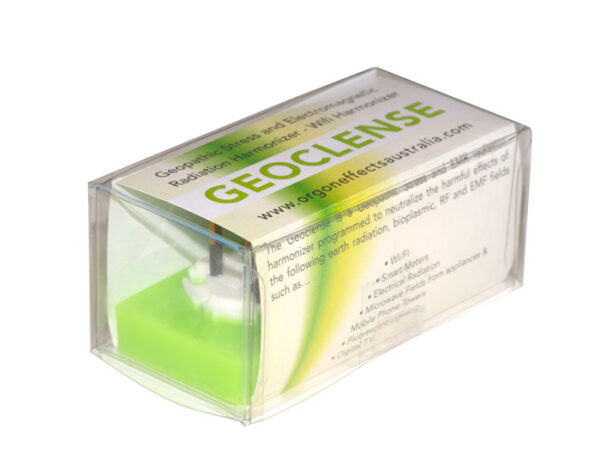 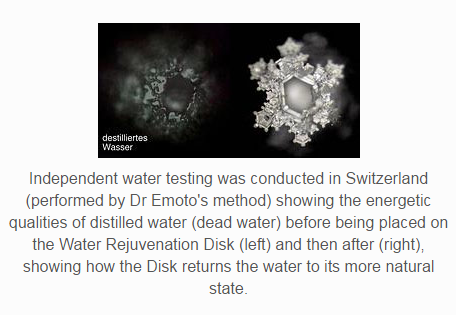 Have you stopped to consider how 24/7 exposure to electromagnetic radiation (EMR) is affecting you and your family?

We are bombarded daily by a complex mix of EMR emanating from Wi-Fi and digital TV’s, Smart Meters, electrical radiation from appliances, power lines, fluorescent lighting, mobile phone towers and more in our living and working environments.

Constant or extreme exposure to strong electromagnetic forces which create unhealthy energetic conditions, may result in mild to major health consequences in living beings exposed to them.

Exactly what types of EMR fields are we exposed to?

We can be exposed to over 30 different types of veritable or measurable EMR fields in our homes and workplaces, both known and unknown, natural and human-generated radiation fields and imprints.

The Geoclense™ is a “man-made engineered smart crystal technology” which is programmed to neutralize the different types of EMR fields we are all typically exposed to no matter where we may live or work around the world.  It dominates the electrical system with a healthy negative charge resonance so that the subsequent EMR fields created by electrical appliances, Wi-Fi etc., emit a negative charge frequency which is in sympathy with the human bio-field, thus neutralizing any electromagnetic stress.

The Geoclense™ has evolved to being much more than just a powerful electrical and Wi-Fi radiation harmonizer.  Over the years, due to our ongoing research, there have been so many more built in programs that deal with negative energy imprints; things that you are often not aware of but is affecting your psyche, mood and ultimately your long-term health.

The Geoclense™ is unique, being the only one of its kind to potentially harmonize ALL the following forms of harmful, noxious EMR emissions: –

Additional “unique” features of the Geoclense include…

How is EMR affecting our health and making us feel?

It is not disputed that noxious electromagnetic fields at any level can trigger biological effects and attribute a diffuse collection of symptoms.

Overexposure to any of the above types of harmful electromagnetic radiation fields at home and work may lead to problems with our health, as EMR creates resonant stress on the human body which directly affects our organs, glands, cells, tissues, immune system, nervous system, hormones and emotional states.

So, what’s the Solution?

The GEOCLENSE™ –  By using the harmonic frequencies of nature, we create harmony with our technology.  The stress put on the human body by the different sources of noxious energy emissions are potentially neutralized with a Geoclense™ operating in a building.  Within an instant, the space feels ”lighter” and “clearer” and the well-being of the people may be restored, creating a healthier and happier home and work environment.

“Out of our 1400 products that we sell, the Geoclense is our #1 bestselling product worldwide.  It is VERY effective and is used by me personally, and my family and friends, and they have been assessed by the most critical electro-hypersensitive and energy sensitive individuals worldwide.  It is the single most effective solution for combating sick building syndrome or geopathic stress that I know of worldwide, in my 27 years of assessing such products.”
Greg Hernon, Natures Energies, Melbourne.

A GEOCLENSE™ is highly recommended for both Home and Workplace, and when traveling. (See our “Twin Pack” and “Triple Pack” specials)

Why do I also need a Geoclense™ for my workplace?

What people don’t realize is that ALL workplaces are the most harmful energetic environments.  This is because there’s generally a higher amount of EMR fields from machines, computers, appliances and fluorescent lighting etc.

The other big energetic influence is Bioplasmic Radiation (Human Generated) caused by negative psychic attacks and impressions aimed at the business and the people working within the business, which are electromagnetic imprints created by outside competitors, skeptics, non-supporters, disgruntled customers, disgruntled staff and animosity amongst staff and management.

It is amazing how different you feel when you remove all forms of Bioplasmic Radiation.  Another reason why people love the uniqueness of the Geoclense™.

Why do I need a Geoclense™ when I travel?

For use in hotels, motels, resorts, holiday houses and apartments.  Plug the Geoclense™ in immediately upon arrival as you don’t know what sort of energies may be there to greet you.  A typical Hotel/Motel room would have had many hundreds of people sleeping in the same bed that you are, potentially leaving an overlap of emotional and illness imprints in that bed and within the rooms, which may interfere with your sleep and emotional and physical well-being while on holiday.  These localized fields over the Hotel beds are all neutralized by the Geoclense™.

Combine the Geoclense™ with a travel adapter to suit the electrical power point of your destination.  Add a touch of harmony to your holiday and travel experience.

“I recently holidayed at an 11-story apartment building, which had four mobile phone panels on its roof – the equivalent of staying in a Mobile Phone Tower! The presence of the phone panels virtually made the building uninhabitable for me due to the extremely noxious energies created by the phone panels as I could feel its disturbance throughout my whole body.  Immediately upon arrival in my room, I plugged in the Geoclense, and within seconds I felt the space was cleared and I could no longer feel the strong energies stressing my body.  I ended up sleeping well with the Geoclense plugged in which is amazing considering how toxic the room felt upon arrival.”
Leanne C. Melbourne, Victoria

The Geoclense™ has been tested and proven for effectiveness by Accredited Kinesiologists and Bioresonance practitioners worldwide.  The GEOCLENSE™ is non-placebo.  Many years of testing proves this beyond doubt.  Testing using methods such as Kinesiology, Bioresonance, Lecher Antenna and the Biotensor that we have performed on the many scalar devices on the market, all strongly indicated a placebo only effect.

It is the knowledge base of the manufacturer of the Geoclense™ Gerard Bini, Intuitive Building Biologist and EMF Consultant, with his advanced intuitive energy reading and dowsing skills developed over many years, that all contribute to the outstanding performance and uniqueness of the Geoclense™.

To activate the GEOCLENSE™: –

The GEOCLENSE™ is sold to over 20 countries around the world.

Choose Orgone Effects Geoclense™ Home and Workplace Harmonizer for yourself and your family, or as a special gift for someone who deserves a healthier home and a healthier life.