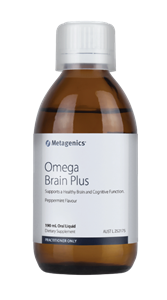 Clinical Benefits
Omega Brain Plus provides 1000 mg of DHA per teaspoon. DHA is required for brain and cognitive development5 and has been shown to modulate functional activity in cortical attention networks.6 Ex-vivo research has demonstrated a dose dependent increase in erythrocyte DHA composition. A 47% increase was observed after a 400 mg dose compared to a 70% increase after 1200 mg supplementation. 7
Phosphatidylserine (PS) is a key constituent of brain and nerve cell membranes and may help to improve memory in people with age-related cognitive decline.8,9 A double-blind, placebo controlled study using 494 patients, over the age of 65, examined the benefits of 300 mg of PS on men and women with moderate to severe age-related cognitive decline.10 Significant improvements in behaviour and cognitive performance, including memory recall, were distinguished in the PS group, compared to placebo (Figure One).11
Omega Brain Plus contains sustainably sourced tocotrienols which may be beneficial in protecting against cellular free radical damage.12 Tocotrienols are members of the vitamin E family.13 A dose of 160 mg of tocotrienols per day has been shown to provide significant reductions in DNA free radical damage as trialled in 64 patients compared to no changes in the placebo group.14