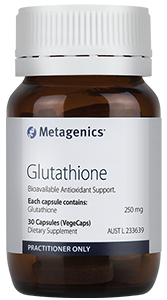 Clinical Benefits
Glutathione (GSH) is a major intracellular antioxidant.2 It has been shown to protect the cells and their components from oxidative damage via the glutathione oxidation cycles. These cycles include the oxidation and reduction of glutathione which enables glutathione to react with free radicals before they cause damage.2, 3
Studies have shown oral glutathione supplementation to be bioavailable and to increase circulating glutathione levels.4A randomised, double blind placebo controlled trial on 54 healthy adults assessed glutathione levels at one, three and six months. Doses of 250 mg or 1000 mg of oral glutathione demonstrated increases in both blood and erythrocyte concentrations of GSH at each time point, including six months (Figure One).1 Levels of GSH returned to baseline after a one month washout period demonstrating that cessation of GSH supplementation causes levels to decrease.1 A separate clinical trial showed an oral dose of 15 mg/kg body weight of GSH to increase plasma levels by 1.5 to 10 times compared to baseline.4
Stores of glutathione are dependent upon nutrient concentrations, exercise, oxidative stress and ageing.2